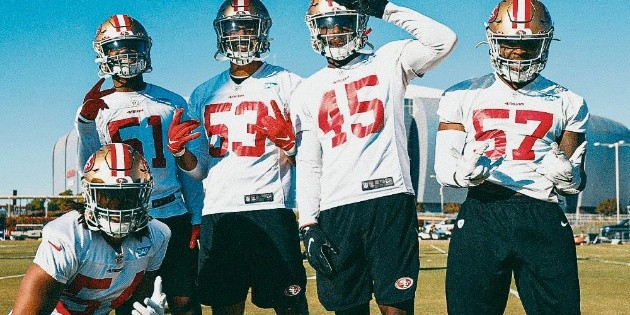 
As soon as the San Francisco 49ers arrived at their temporary home in Arizona, their coach Kyle Shanahan met with several players and asked them to take care of each other.

As important as practice, game plans, and preparations for a team that aspires to Playoffs, is the mental well-being of San Francisco players, consider Shanahan. They will stop seeing their families for at least three weeks after COVID-19 protocols tightened in the county where they play.

As a result, Contact sports games and practices were banned until at least December 21.

“I’m just telling everyone that no matter what happens, when someone has a problem, none should be considered too big or too small,” Shanahan explained. “A lot of guys have these things inside of them. I gathered about 20 the night before and just asked them to find this. Let them understand that this is human nature. You are going to feel some things in the next three weeks and you shouldn’t ignore them.

“I always draw attention to this, because the worst thing about being in these situations is feeling alone on an island. We have a task force, so we need to come together and make sure we help each other get through this. “

The coach said the team doesn’t feel like a victim right now, but understands that it faces a challenge. The Niners found out last week that they couldn’t play in their hometown, just as they were boarding a flight to Los Angeles to face the Rams.

The 49’ers (5-6) gave the surprise by beating the Rams 23-20, to continue in the fight for a postseason berth. They returned to the San Francisco Bay area and integrated the plan to train and play their next two games as nominal hosts at Cardinals Stadium.

The Steelers face a new challenge

Bud Dupree slapped the grass several times, disgusted and aware of what the pain in his right knee meant.

A misstep in the fourth quarter before Baltimore Wednesday meant the end of the season of the linebacker with the Steelers from Pittsburgh.

Although coach Mike Tomlin pointed out that his team “sucked before (Dupree) got hurt,” the image of the player limping into the locker room struck a chord with a bench already struggling to find the energy to beat the Ravens terribly. decimated by the coronavirus.

Pittsburgh eventually found a way to win 19-14 and improved to 11-0, with a win that seemed otherwise. Tomlin initially criticized his team mercilessly, calling their performance “college sophomore level.” Although the coach was calmer Thursday, the Steelers appear to be moving in opposite directions.

On the one hand, the weeks go by and his record remains perfect. On the other hand, each party shows an imperfection that could derail the historic campaign.