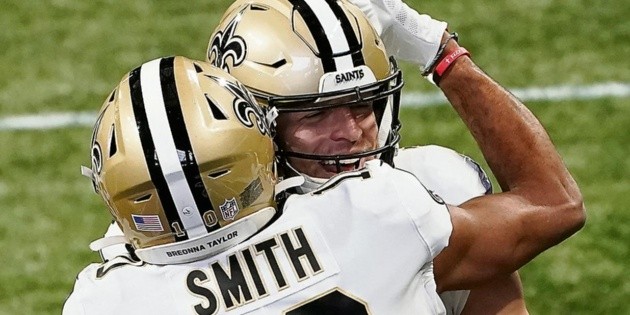 
The New Orleans Saints eventually allowed a touchdown to be scored, but the defense held firm at the end to sustain their nine-game winning streak by beating the Atlanta Falcons, their division rivals, 21-16.

The Saints (10-2) also secured their place in the Postseason thanks to the 34-30 defeat of Chicago before Detroit.

In his third straight game as a starter for the injured Drew Brees, Taysom Hill threw the first two touchdown passes of his career. But a fumble deep into Atlanta territory allowed the Falcons to react.

Hill completed 27 of 37 passes for 232 yards. He also rushed for 83 yards on 14 carries, including a career-long 43-yard rush that left the table set for the first touchdown pass.

That first send to the end zone was 15 yards with Tre’Quan Smith, in which it was Hill’s first touchdown pass since his senior year as a collegiate quarterback in 2016, playing for Brigham Young.

The second touchdown pass from Hill it was an 11 yard shipment with Jared Cook before finishing the first half.

“I don’t care what people think. I know there was a lot of talk around that first touchdown pass, but as long as we keep winning games, I’m happy, “said Hill.

Matt Ryan he completed 19 of 39 passes for 273 yards. He was sacked three times, well below the 17 times he scored in the last two meetings with Nueva. Orléans.

Still, he faced great pressure for most of the game. His rushing game didn’t help either, with just 70 yards and 3.3 yards per carry, and on his last attempt to make the comeback, his pass to the end zone on the fourth down was incomplete.

“They have good defense, that’s true,” Ryan said. “We needed to get in a better position at third down to give us a chance to win.”

Infamous victory for the Raiders against the Jets

Derek Carr hit a 46-yard touchdown pass to Henry Ruggs III with five seconds left to guide the Las Vegas Raiders to a 31-28 win over the New York Jets, who remain winless on the season and lead. the race for the first draft pick.

The Jets they went up 28-24 with 5:34 minutes remaining with a touchdown a yard from Ty Johnson and the defense managed to stop on the fourth down, a play that seemed to end New York’s agonizing wait for its first win of the season.

But the Jets were unable to advance a three-play offensive drive at the chance to seal the win, and Carr and the Raiders had 35 seconds to try to make an unlikely comeback. Four plays later, Carr connected with Ruggs, who beat rookie cornerback Lamar Jackson with a perfect pass that culminated in a 46-yard touchdown.

The Raiders (7-5) cheerfully celebrated, while the discouraged Jets (0-12) they only imagined what could, and should have been.

Carr finished with three touchdown passes, including two to Darren Waller, and added another on the ground.