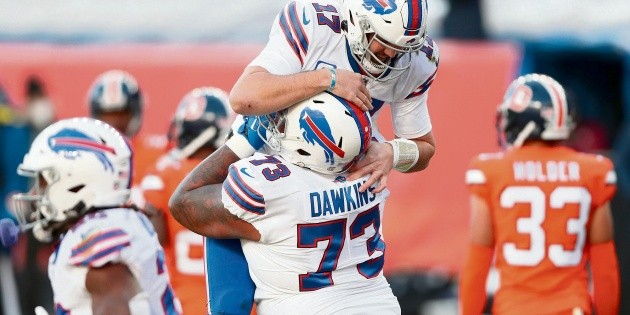 
The Buffalo Bills captured their first AFC East title in a quarter century yesterday when the quarterback Josh Allen threw for two touchdowns and ran for two more in a 49-18 road win over the Broncos of Denver.

The Bills (11-3) scored twice in a 17-second span of the third quarter for their fourth straight win.

The triumph of the Bills also ends the 11-year reign of the Patriots from New England at the top of that Division; The six-time Super Bowl champion team was out of any chance of being crowned in its sector after last week’s loss to the Los Angeles Rams, paving the way for a Bills that haven’t been crowned since Jim Kelly, Thurman Thomas , Andre Reed and Bruce Smith were the star players on a team that reached the Super Bowl four consecutive times at the beginning of that decade.

For their part, the Broncos (5-9) have their fourth consecutive losing season for the first time since they had 10 straight seasons averaging less than .500 since 1963-72.

They also became the first team to go five years without making the postseason after a Super Bowl title.

Allen threw for 359 yards completing 28 of 40 passes, making contact with receiver Stefon Diggs 11 times for 147 yards before he had a foot injury in the fourth quarter, and Cole Beasley eight times for 112 yards.

The Broncos lost to quarterback Drew Lock, who had 20 of 32 passes for 132 yards and a touchdown.

Chiefs vs. Saints, the highlight of the day

There are holiday traditions in the NFL, which include Christmas, inconsequential games for the Jets, Bengals and Lions, as well as analyzing possible postseason scenarios.

But of course, the focus will be on two clubs already heading to the playoffs: Kansas City, monarch of the last Super Bowl, visits New Orleans.

Green Bay caresses the best seed in the NFC

With the righteous. Aaron Jones rushed for 145 yards and a score in a game in which the Green Bay Packers reached the end zone in their first three drives before taking their foot off the gas to beat the Carolina Panthers 24-16. Aaron Rodgers (pictured) threw for 143 yards, his lowest number of the season, but got a touchdown pass, his 40th of the season and ran for yet another. Rodgers is the first NFL player in history to make 40 throws to the end zone in at least three separate seasons.