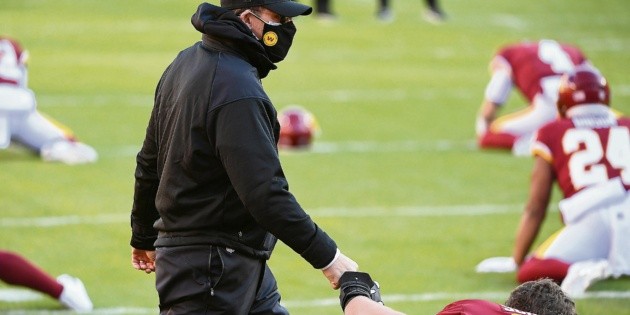 
The mere fact of seeing Alex Smith on the grid is something to behold. That he is one win away from taking Washington back to the postseason is even more surprising.

Just over two years ago, the veteran Football Team passer suffered a terrible, exposed fracture to his right leg that not only put his professional career, but also his life at risk after developing a series of infections that required a total of 17 surgeries , including muscle and skin grafts. Today, you can cap off a Hollywood-worthy comeback with a win over the Philadelphia Eagles.

The Washington Football Team (6-9) seeks for his part to write his own comeback. With a victory over the Eagles (4-10-1) would be the first team in history to advance to the playoffs after starting the season with a 2-7 record.Dwayne Haskins was the WFT’s starting quarterback for the first four weeks and went 1-3 before being replaced by Kyle Allen in the next four games (1-3). After an injury, it was Smith’s turn, who changed the course of the capital’s team’s season. Now, he just needs one more win.

Despite the Eagles they were mathematically eliminated with their loss last week to Dallas, they will not want to be anyone’s step. Rookie Jalen Hurts will have one last chance to show he can compete for the start with Carson Wentz.

The Eagles are second in the NFL in undesirable turnovers and have lost six of the last seven games on the regular schedule. None of that bodes well against a Washington defense that is fifth in the NFL in points allowed, third against the run and third within the last 20 yards.

The Eagles have won six of the last seven series meetings, the only victory for Washington in that span in their most recent game, in Week 1 of the current season.

Dallas and NY don’t want to be left behind

Sports romantics will want to see Smith and Washington win tonight in Philadelphia. Cowboys and Giants are not part of that group.

The winner of the Giants-Cowboys game at 12:00 PM will have made it halfway to the postseason. Unfortunately, the other half is not up to them, but to Philadelphia defeating Washington.

It’s a fitting finale to one of the worst Divisions in NFL history, the winner of the NFC East being just the third losing-record divisional champion in league history, joining Seattle in 2010 and Carolina in 2014.

Both teams have traveled different routes to get to this point. Dallas, which started the season 3-9, has won the last three games on the schedule to make it into the final week alive.

The Giants, by contrast, have lost the last three games to relinquish control of the Division after a four-game winning streak.

History is on the Dallas side. Not only are the Cowboys riding a three-game win streak, they have won the last seven games of the series including a 37-34 victory in Week 5 of the current season.