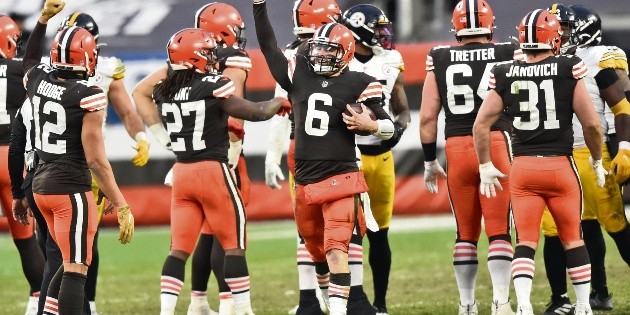 
Gripping the ball with which the game had been played, Baker Mayfield looked at the giant screen where the most memorable moments in the history of the Browns were shown. They were rare and distant passages.

In the stands, some fans in masks hugged, exchanged claps and took one last look at the score: 24-22, Cleveland had defeated Pittsburgh.

They wanted to make sure it wasn’t a dream. The longest Playoff drought in the NFL was over.

The Browns settled into the postseason for the first time since 2002, surviving a comeback attempt to defeat the Steelers, who rested quarterback Ben Roethlisberger and other starters.

“I’m happy for our fans,” said coach Kevin Stefanski, who broke the spell during his first year on the job.

Cleveland (11-5) came close to squandering a 15-point lead in the fourth period, but stopped a two-point conversion attempt from Pittsburgh and recovered a short kick with 1:22 minutes left to secure the win.

A week of disruptions by COVID-19 concluded with a celebration for the Browns, whose prize is another duel against the Steelers, monarchs of the North Division of the American Conference, next weekend in Pittsburgh.

Nick Chubb had a touchdown carry, Baker Mayfield threw a touchdown pass and the Browns resisted the comeback attempt led by Mason Rudolph for the Steelers (12-4), who had the luxury of resting their best players after get the divisional scepter last week.

Now the Browns will seek to break another losing streak, since the last meeting of Playoffs they won happened in 1994.

The Washington Football Team was crowned in the East Division of the National Conference by defeating the Philadelphia Eagles 20-14, and in this way they secured their place in the Playoffs, where they will face the Tampa Bay Buccaneers in the Wild Card Round.

The Ravens they win their ticket

The Baltimore Ravens yesterday set a franchise record of 404 rushing yards and clinched a postseason spot with a 38-3 road win over the Cincinnati Bengals. The quarterback Lamar Jackson (photo) threw three touchdown passes and became the first quarterback from NFL in rushing for more than a thousand yards in two consecutive seasons.

The Ravens (11-5) will now face the Tennessee Titans in the Wild Card Round.

Colts advance to Playoffs; Dolphins is out

Jonathan Taylor ran for a franchise-record 253 yards and two touchdowns, topping the Indianapolis Colts 28-14 victory over the Jacksonville Jaguars. Indianapolis (11-5) will make its first postseason appearance since 2018 and second since 2015. The Colts will be the seventh seed and will face the Bills of Buffalo as visitors. The Colts’ victory also meant the Miami Dolphins were eliminated from playoff contention.

While Jacksonville (1-15) lost its last 15 games and will have the first overall draft pick.

This is how Week 17 ended