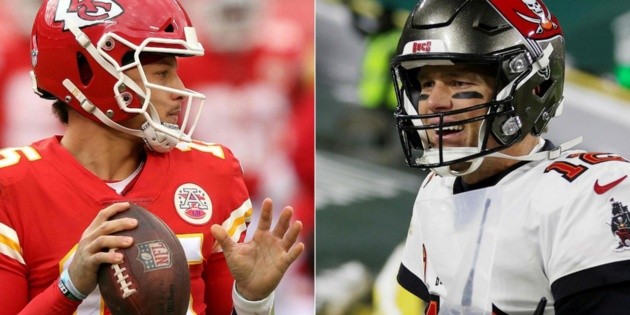 
The day of the Conference Finals includes drama, but at the end of it, new pages are written in the history of the NFL.

This was demonstrated by the Tampa Bay Buccaneers and the Kansas City Chiefs, who imposed their law against the Green Bay Packers and Buffalo Bills, respectively, to be crowned in both the National and American Conference and seal their ticket to the Super Bowl LV.

The greatest figure of the League in the Century XXI against the one who is called to be his heir in the coming years: Tom Brady before Patrick Mahomes next February 7 at the Raymond James Stadium of Tampa.

Early yesterday afternoon, Brady found that he and the Super Bowl go hand in hand, although now with a new team, in a new city and where he will play home.

The man with six titles NFL became the first quarterback what will the Super Bowl in your team’s stadium. It helped him a lot when the Tampa Bay defense captured Aaron Rodgers five times, and also a curious final decision by the Packers on fourth down and goal, despite his three interceptions, as they defeated first-seeded Green 31-26. Bay and thereby win the NFC title.

Hours later, the scene of the Arrowhead Stadium and the powerful offensive of the Chiefs they were a lot of piece for the Bills of Buffalo.

Kansas City demonstrated why it has been the best team in recent years, with the help of a Mahomes who showed no signs of deterioration from what happened last week against the Browns and who had in Travis Kelce (who set a record for receptions in a Post-cover game with 13) and Tyreek Hill to his best accomplices to beat Buffalo 38-24.

It looked like the Bills would put the champs into trouble by going 9-0 up in the opening minutes of the first quarter; However, Mahomes and company must never be considered dead, who in the second set were plugged in and put 21 points on the scoreboard.

The rest of the game was a formality for the champions, who arrive at the big event for the second consecutive year.

Without a doubt, the Super Bowl in Tampa will be a generational duel.

It’s amazing to have another win on the road and now we have a home game, and who would have thought of a Super Bowl at home?

We trust each one of us, we believe in ourselves, but the job is not done. You have to go to Tampa and bring the trophy

– Patrick Mahomes, quarterback of the Chiefs

The record man goes for one more

Tom Brady, in his 10th Super Bowl appearance, will seek to register his name with another select group in NFL history.

The veteran will seek his seventh title, but it will be the first to be played with a wild-card team in the postseason.

In the 54 years of the Super Bowl era, only three teams played all of the playoffs away from home and kept the championship ring.

The 2005 Pittsburgh Steelers, 2007 New York Giants and 2010 Packers all managed to win the title after visiting in all three of their Playoff games.

This is the most Playoff victories for a quarterback 26 years of age or younger, and it is those achieved by Patrick Mahomes after last night’s win against the Buffalo Bills