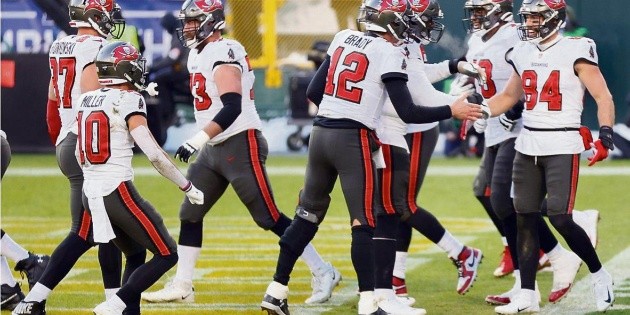 
Some are Hall of Famers who were among the most prominent figures in the NFL. Others are anonymous role players whose contributions went largely unnoticed by the majority.

There are veterans who joined in for one last attempt at the title, and astonished rookies who were thrown on the stage of the Super Bowl.

Their proper names range from A to Z, with eight of them named Brandon – a ninth named Brandin – and five players named Kyle.

They are all part of the “Brady Gang,” the 218 players who have participated in a Super Bowl as teammates with Tom Brady in his nine trips leading up to the title game with New England. That list will increase to more than 40 names next Sunday, when the quarterback plays in Tampa his tenth big game and his first with his new team, the Buccaneers.

Some were carried away on the journey and barely appeared in those six titles won by Brady. Others contributed key plays that decided such encounters, whether it was Malcolm Butler’s crucial interception at the end of the end zone that sealed the win over Seattle, or Adam Vinatieri’s field goals off the Rams and Carolina.

No one has played more Super Bowls with the six-ring winner than Stephen Gostkowski, who accompanied him on those occasions during his spells with New England. Rob Gronkowski can join that group right behind Gostkowski this year with his fifth participation, tying the number of Matt Light, Devin McCourty, Patrick General and Matthew Slater.

There are 26 players who have been to three Super Bowl wins as their teammates, and Gronkowski hopes to join that group this year.

Three of Brady’s teammates in Super Bowls are already inducted into the NFL Hall of Fame, and others are likely to do so in the future. Ty Law, who was part of New England’s first three champion teams, entered the Canton, Ohio campus in 2019 and is the only one of the three to have entered based primarily on his performance alongside the quarterback.

Randy Moss and Junior Seau teamed up with the star quarterback on their career sunsets and both made a big impact during a perfect 16-0 regular season in 2007, but failed to win on their only trip to the Super Bowl.

Tom has completed passes to 37 players in his previous nine Super Bowls, and very few of them stand out as his favorite targets. Julian Edelman and Deion Branch, both named the MVP of a Super Bowl with Brady, are tied for the most receptions at 24 each. Edelman’s 337 yards amassed 16 more than Branch recorded on passes thrown by Brady.

Gronkowski could pass them this year by reaching the NFL Final with 23 receptions for 297 yards. He already has the mark for the most touchdown passes thrown by Brady with three, one more than David Givens, Danny Amendola and linebacker Mike Vrabel.

Tampa Bay defender Jason Pierre-Paul has the opportunity to join a much more exclusive roster as one of the players to have beaten Tom in a Super Bowl and won a title as his teammate, after being part of the team. of the Giants who defeated New England after the 2011 season. Pierre-Paul defended two passes and brought a blow to the quarterback in a 21-17 win that season.

The only others who have done so are Chris Long and LeGarrette Blount. Both were champions in 2016 with the Patriots and later champions with Philadelphia the following season, when the Eagles bungled a title defense attempt. Blount also won a Super Bowl with Brady in the 2014 campaign.