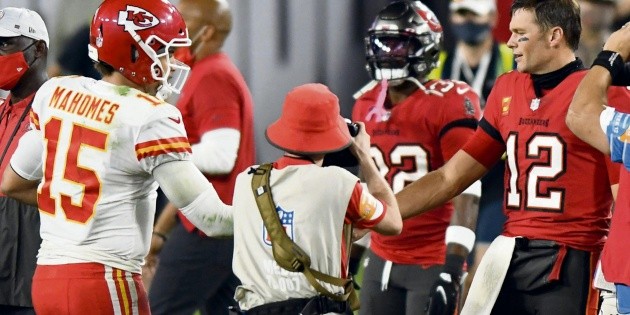 
Sunday’s Super Bowl game between the Tampa Bay Buccaneers and the Kansas City Chiefs will be marked by the generational duel between veteran Tom Brady, the most winning quarterback in history, and young Patrick Mahomes, his best successor.

At 43, resisting retirement, Brady has surprised the NFL with a new return to Super Bowl To try to snatch Kansas City Chiefs the crown won last year and prevent them from establishing a new order in the League.

Brady will add 10 Super Bowl appearances on Sunday, a 48% ERA in his 21 career seasons, and has so far lifted a record six titles, numbers that virtually none of the NFL’s 32 franchises reach.

Only the Patriots have more Super Bowl appearances (11) than the quarterback, and only this team and the Steelers match him with six titles so far.

Sunday’s clash at Raymond James Stadium may be for Brady the greatest challenge of his legendary career due to the size of the rival team and the quarterback who commands him.

At 25, Patrick Mahomes has already collected the Most Valuable Player awards (MVP) of the season in 2018 and Super Bowl que Kansas City Chiefs beat the 49ers in 2020.

This season, already the new face of the NFL, the Texan has been able to withstand the pressure to become the youngest quarterback to reach the Final in two consecutive seasons.

They praise each other

“I admire Patrick for the type of player he is,” said Brady. “His teammates love to play with him, he has a lot of charisma. No moment is great for him. He always seems to play at his highest level when his team needs him ”.

Mahomes did not hesitate to recognize Brady As the “GOAT“(The acronym in English for” The Greatest of All Time “).

“If you are a young athlete and you play any sport and you don’t admire people like Brady, you are crazy,” he said. “They are guys who have been successful year after year. It’s the kind of greatness you should aspire to. “

Brady and Mahomes, the two quarterbacks with the biggest age gap in a final, have met four times so far, with two wins each.

There will be more people in the stadium

The NFL announced that they will allow access to another 2,500 people for Super Bowl LV, to be played this Sunday, for a total of 25,000 fans at Raymond James Stadium.

A few weeks ago, the League reported that they would allow 22,500 fans in the stands, because the great game, between the Kansas City Chiefs and the Tampa Bay Buccaneers, is played in Florida, a state that allows capacity at sporting events. Seven thousand 500 of those places were invitations to workers of the medical services who faced the COVID-19.

Within the health protocol that will be implemented by February 7, measures such as the mandatory use of face masks are prohibited, meetings in the vicinity of the enclosure are prohibited, they must remain seated in the assigned places at a distance of 1.8 meters and no money is received in cash or physical tickets.

With information from El Universal