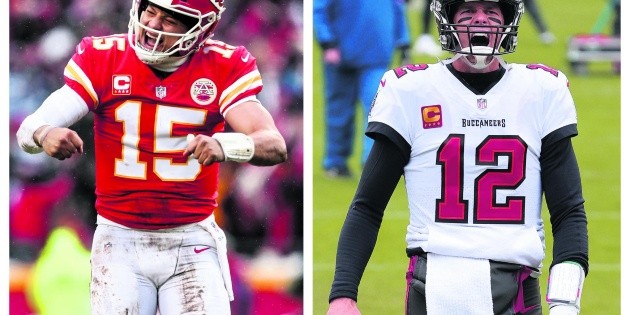 
It’s time to say goodbye to speculation. Today, at 5:30 pm on the pitch at Raymond James Stadium, the Tampa Bay Buccaneers will face off against current NFL champions, Kansas City Chiefs.

On the one hand, there is the wisdom and experience that only a man who will add his 10th Super Bowl appearance today can bring. Tom Brady keeps breaking records and myths that seemed impossible to overcome. In his first year with the Bay Team, Brady has completely shaken the shadow of his former coach and has shown that talent and skill are his alone. This afternoon, Brady will seek to lift the trophy for the seventh time Vince Lombardi and also make history by winning at home, but his rivals will not make it easy for him.

On the other side is youth and momentum. What some call the “future” of the NFL, seeks to show that it really is the present. A motivated Patrick Mahomes He wants to repeat the feat he accomplished last year in Miami and be crowned for the second year in a row.

Despite the fact that all the attention seems to be focused on the confrontation between the quarterbacks, there are other matches that are the ones that could ultimately set the course of this story.

The weapons at the disposal of Mahomes and Brady

The Kansas City Chiefs’ offensive arsenal is one of the main focus of this Super Bowl, but what the Tampa Bay Buccaneers defense achieves to stop it will be critical.

Jason Pierre-Paul will be the man to watch, leading Tampa Bay’s sacks with 9.5 on the season and another two in the postseason. His direct confrontation will be with the offensive tackle, Mike Remmers, who will take the place of the injured Eric Fisher, out due to a ruptured Achilles tendon.

Meanwhile, the corps of linebackers led by Lavonte David and Devin White will have the mission of containing what Travis Kelce can do.

The Kansas City Chiefs defense will not have an easy task either, because in addition to seeking to pressure Tom Brady, it will also have to face them against the versatility of Leonard Fournette and Ronald Jones.

A Kansas City Chiefs secret weapon won’t be on the field, but he knows how to stop Tom Brady. It is about Steve Spagnuolo, defensive coordinator of the Chiefs and one of the main responsible for stopping the quarterback in that Super Bowl XLII to which he arrived undefeated.

Among the many things that this NFL season will be remembered for, one of them will be the changes that all stadiums had to make due to the COVID-19 pandemic.

Raymond James Stadium will not look crowded and will only have 25,000 fans, of which 7,500 will be health workers who have already been vaccinated.

This is the first time in the history of the 55 years of the Super Bowl that a team receives and plays the most important game of the season and its fans will not be able to crowd the building to support them.

Upon admission, spectators will receive a package that will contain a mask, antibacterial gel, gloves and a printed safety protocol to remind fans of the measures they must follow to reduce the chances of contagion.

In this edition, access to the stadium was reduced to the accredited press and all press conferences have been held remotely.

Another unprecedented fact is that for the first time in this Super Bowl cash payment will not be accepted. All purchases must be made by card or by digital means. For fans who do not have this option, “ATMs” will be installed where they can buy prepaid cards, the minimum value of which will be $ 500 and thus avoid contact between sellers and customers.