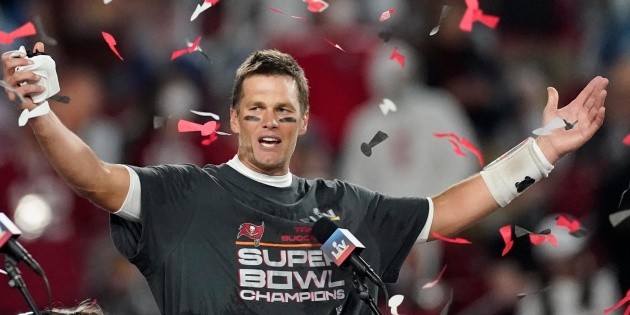 
There are dumbbells that are destined for greatness regardless of location and circumstance. And if ingredients such as inspiration and redemption are added to this, there is no force that marks a stop on the road to glory.

Yesterday, Tom Brady and Rob Gronkowski recreated their best years together in New England, but wearing a different uniform; A defense that did not give up the best player in the League and the determination of some men who were no longer bet on other sides led the Tampa Bay Buccaneers boat to a successful conclusion to lift its second Vince Lombardi trophy in its history.

Brady and Gronkowski connected a couple of times in the end zone in the first half to become the highest-scoring quarterback-wide receiver duo in Super Bowl and Postseason history, re-enacting their good times that led to them. win three rings with the New England Patriots.

But the story of the night in Tampa was taken by the Tampa Bay Buccaneers defense, who took advantage of the Kansas City Chiefs’ offensive line absences and bothered during the whole meeting a Patrick Mahomes that he felt out of his element and couldn’t create explosive plays.

A true reflection of this was that the Kansas City Chiefs attack was limited to just three field goals in 60 minutes of action, with elements like Shaquil Barrett, Jason Pierre-Paul and Ndamukong Suh breathing in Mahomes’ face, forcing him to be intercepted. twice and captured three times.

The cherry on the cake was put by Antonio Brown Y Leonard Fournette. The first by achieving the score with which Tampa went with a 15-point lead at halftime and the second by putting the last nail in the Chiefs’ coffin by escaping 27 yards into the end zone and placing the score at an unreachable 28 -9.

In the end, the bet on old glories and rejected on other fronts led Tampa Bay to end its 18-year drought and proclaim itself the new king in the NFL.

The Buccaneers proved to be one of the most dominant Super Bowl champions in history by completely neutralizing a Kansas City team that entered the game as a favorite.

The greatest, the MVP

There is no room for doubt: Tom Brady has long been the greatest of all time.

This was evident from before he arrived at the Tampa Bay Buccaneers, but last night, playing with efficiency and the more than tangent leadership that he is known for, he made the arrival of his seventh Super Bowl ring and his fifth Most Valuable Player award. in these types of matches.

Brady he completed 21 of 29 passes for 201 yards and three touchdowns; numbers nothing out of this worldBut enough to match Otto Graham of the 1950s Browns as the only quarterbacks with seven NFL titles.

The final moments of the second quarter were at stake when officials decided to flag as interference a barely perceptible contact by Tyrann Mathieu on Mike Evans in the end zone, which brought with it a first and goal with 10 seconds remaining. On the next play, Tom Brady connected with Antonio Brown to put things even more uphill for the Chiefs after the score was 21-6 at halftime.

Tampa Bay did not release the accelerator at the beginning of the second half, because after Kansas City discounted with a field goal, in the next offensive series the Bucs extended the lead with a 27-yard run by Leonard Fournette.

Running for his life

Patrick Mahomes had perhaps one of the worst performances of his career, but this was because the Buccaneers’ defensive line constantly put pressure on him, especially on third-down plays where the Chiefs were ineffective.

Discipline left the Chiefs in Tampa

Out of place, unnecessary rudeness, unsportsmanlike attitudes, interference and restraints… lots of restraints.

Kansas City Chiefs gave a sample of how to stop the Chiefs themselves. Hurt themselves.

At half time they accumulated more fouls (eight) than points (six) and more frustration than hope. It was an uncharacteristic loss of composure that paved the way for a 31-9 loss to the Tampa Bay Buccaneers.

His 95 yards for fouls in the first half was the most for a team all season and in the Playoffs this year. It was one more yard than all the franchise accumulated in any game throughout the year. Kansas City Chiefs committed three fouls in the second half to finish with a total of 11 for 120 yards.

Perhaps the most painful infractions were the two pass interference late in the second quarter that put them down 21-6 at halftime.