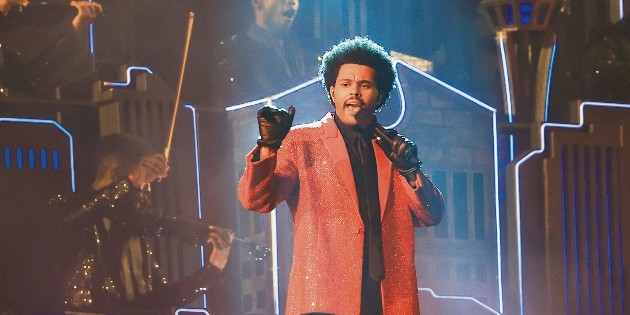 
The Super Bowl halftime show had The Weeknd as the only protagonist in a show that caused quite a few comments on social networks, not all of them very friendly for the show offered. After the first part of the final game of the NFL, the Canadian singer took the stage mounted on the playing field of Raymond James Stadium, in Tampa.

The show began with a chorus of heavenly chants, as a preamble to their song “Starboy,” and then continued with “The Hills.” In this song the chorus behind the singer became more powerful, despite the brevity of the version.

As the show became more television-focused, with the crowd restricted in the stadium, The Weeknd’s production had a behind-the-scenes moment on the stadium forum, with the song “I Can’t Feel My Face.” At the beginning of the song the singer was almost glued to the camera, inside a tunnel in which later he had the choreography of a dozen dancers surrounding the singer. The costumes resolved the issue of health security with masks used by the dancers, also with a nod to the concept of the face that is displayed in the lyrics of the song.

Soon the singer returned to being visible in the stadium, still singing in front of the camera with the stands behind him, singing “I Feel It Coming”, followed by “Save Your Tears”. This song The Weeknd sang very close to his guitarist, one of the few times the musicians saw each other. More performers would soon be seen, with the string section leading to “Earned It.”

With little more than ten minutes of concert, the repertoire lined up to the closing, which would culminate with the singer descending to the grass of the stadium to sing and dance. On the playing field the dancers returned in greater numbers, also dressed in red and masked. The final song was “Blinding Lights”, which belongs to “After Hours”, his most recent studio album, released only in March 2020.

Thanks to the lighting of the scenery and the set of cameras, each of the songs that The Weeknd played presented a different visual aspect. For this, the musician invested seven million dollars for the production of his show: For the artists who go through the halftime show, the subsequent exposure they have is profitable on that scale, as confirmed by the Colombian Shakira in her participation in the 2020 Super Bowl with Jennifer Lopez (an increase in streamings of 834 percent ).

Unlike them and other established ones who have been through the Super Bowl show, The Weeknd did so with a solid but brief career, with only four studio albums (“Kiss Land” was their debut in 2013: they followed “Beauty Behind the Madness ”from 2015 and“ Starboy ”from 2016).

There were no special guests

Abel Makkonen Tesfaye, the first name of The Weeknd, covered seven songs from his repertoire, although without the presence of any guests as had been speculated in rumors the previous days.