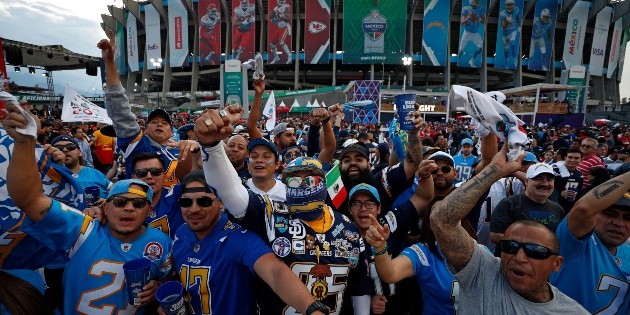 
Mexico City is guaranteed the return of NFL regular season games for 2022 and 2023, said the director of the league’s office in the country, Arturo Olivé, on Wednesday.

The NFL had planned trips south of its border to play games on its regular schedule both last year and this year, but the pandemic did not allow them to take place.

“We are certain that we will have a game next year, we are already thinking of having a game in 2022, hoping that the conditions of the pandemic allow it, as it was not the case in 2020 and 2021, “Olivé said in a virtual press conference.” We are confident that we will be able to return to Mexico with a match in November. “

Mexico City had hosted games in the 2016, 2017 and 2019 seasons. A meeting scheduled for 2018 between the Kansas City Chiefs and the Los Angeles Rams it was canceled due to poor grass conditions at the Azteca Stadium.

The NFL and the Televisa network, the largest generator of Spanish-language content in the world and owner of the Azteca Stadium They had a signed agreement to hold meetings in Mexico until 2021.

“It is not compensation, it is a transfer of commitments that could not be carried out, so what we did was go through those dates for 2022 and 2023 “, said the leader. “I do not want to generate uncertainty, everything is in place and working, now we will pause for the start of the season, but then we return to the issues internally for the planning process of the game.”

The meetings in Mexico will continue despite the fact that as of 2018 there was a change in the federal government and the administration now headed by President Andrés Manuel López Obrador (AMLO) decided to stop investing in international sporting events.

With his predecessor, Enrique Peña Nieto, the Government of Mexico, through the Ministry of Tourism, provided resources for the holding of events such as Formula 1, NFL and NBA matches and the Mexican Tennis Open.

Each NFL game held in Mexico in the past administration cost $ 14.5 million. These resources will no longer be made available.

“We solve the economic part internally, but in terms of logistics and events around the game, support is still there from the federal government and Mexico City and collaboration is close,” said Olivé.

Mexico is considered the country outside the United States with the largest number of NFL fans. According to the latest study carried out by the league, released by Olivé, some 48 million fans follow this sport in the country.

“The idea is to continue with games in Mexico in the future, both in the medium and long term, but now the focus is on the game of 2022”, there is still no date and there are no teams, but we are working on the part that does not touch after backstage for when the league decides to announce it, “he concluded.

If you want to have more content, more images and even more news, then download INFORMAPlus, the digital application of THE REPORTER, where we have exclusive materials for you.