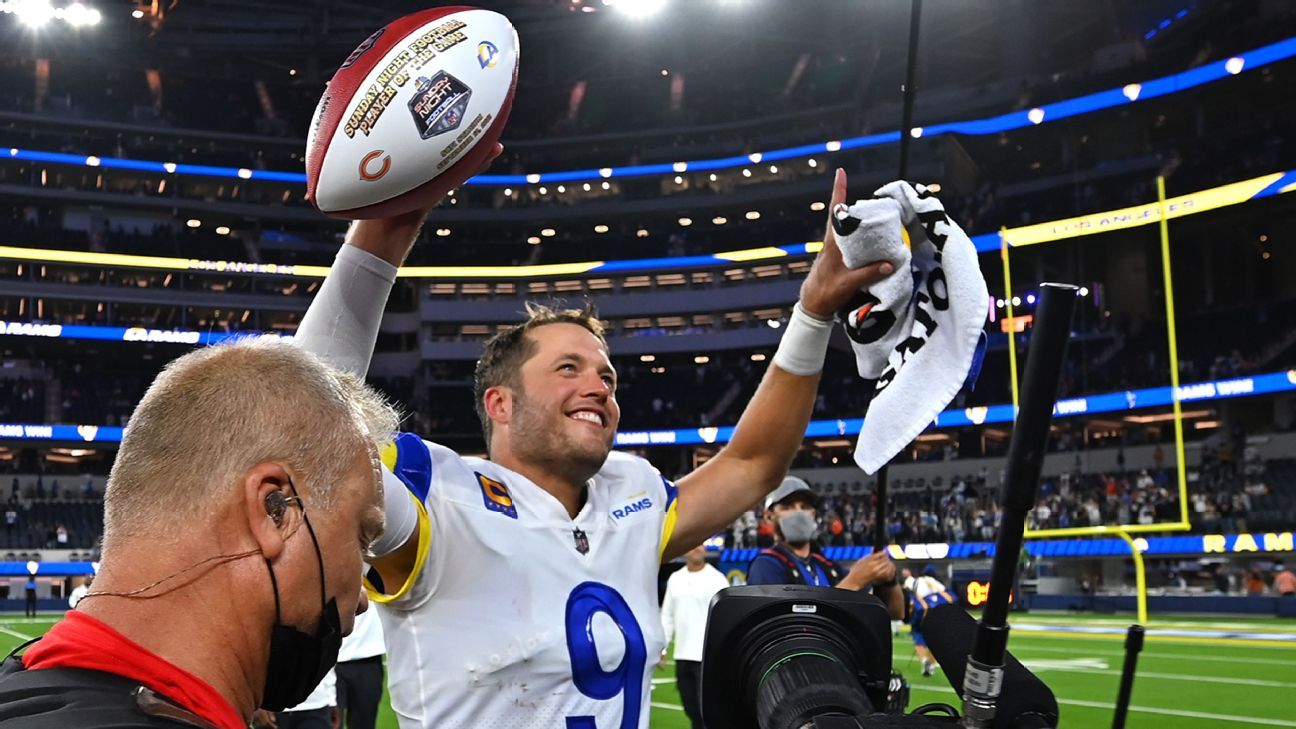 DETROIT – Quarterback Matthew Stafford overcame the pain in his last game with the Detroit Lions.

It was January 3 and the Lions were trying to end a three-game losing streak amid a disappointing 5-11 season. Battling injuries to the ankle, ribs and thumb, Stafford completed 20 of 31 attempts for 293 yards, three touchdown passes and an interception in the Week 17 loss.

• ‘I’ve been ready since I got here’: The Browns signed Case Keenum for this moment
• The Tao of Teddy Bridgewater of the Denver Broncos
• Chiefs running back Darrel Williams turned Mom’s tears into happy shouts.
• The Raiders begin to figure out how to use the Josh Jacobs combo, Kenyan Drake
• Stephon Gilmore’s ‘homecoming’ gives Carolina Panthers and Football City USA a boost

Two months later, Stafford, the Lions’ career leader in yards, touchdowns and completions, was traded to the Los Angeles Rams for quarterback Jared Goff in a trade of former No. 1 picks.

On Sunday, Stafford will welcome his old team to his new home, SoFi Stadium (4:05 pm ET on Fox).

Stafford was 74-90-1 in Detroit and led the Lions to three winless playoff appearances in his 12 seasons. His fortunes have turned in Los Angeles, where Stafford leads a red-hot Rams team (5-1) with Super Bowl aspirations. He is among MVP favorites and his 16 passing touchdowns are the most by a quarterback in his first six games with a new team in NFL history, according to the Elias Sports Bureau.

Meanwhile, the Lions have struggled in their first season with first-year head coach Dan Campbell. They are the only winless team in the NFL at 0-6, coming off a lackluster 34-11 loss to the Cincinnati Bengals during which Goff was booed by local fans.

Stafford said Sunday that facing the Lions would be “like any other game.” But for a die-hard Lions fan base, who saw him leave it all on the field for 12 seasons, it isn’t.

“This is not just a regular game for either side. For us die-hard Lion fans, Matt’s change was the end of an era of what could and should have been, “said Ty Mopkins, a longtime Detroiter and lifestyle gear designer. “True Lions fans are generally happy for Matt and want to see him win a championship, so it’s like having our two kids compete against each other. Of course, the Lions fans will cheer on the team on Sunday, but a little bit of all of us will also support Matt. ”

Like Mopkins, many others share bittersweet emotions as they see Stafford shine elsewhere, but they seem more happy for him than upset.

“Is mixed. A lot of people still don’t understand why he couldn’t have the same success here with some of the top-tier talent that he had around him, ”said former Lions All Pro wide receiver Herman Moore. “Even when the defenses were solid, they had a Calvin Johnson, Reggie Bush and a pretty decent running game, they still couldn’t put together the success that they have had in Los Angeles. On top of that, Jared Goff is not comparable to Stafford from a statistical point of view or in terms of wins and losses. So fans don’t see it as an even exchange. “

Stafford threw for at least 4,000 yards in eight of his 12 seasons at Detroit, but was part of four winning teams.

“Look, I think he’s the best quarterback they’ve had since [former Lions QB] Bobby Layne, that’s a no-brainer, “said Mike O’Hara, a veteran Lions writer who was inducted into the Michigan Sports Hall of Fame in 2019.” When I heard the word ‘polarization’, I disagree with that [Stafford’s career is] polarizing. I think people have different opinions, but inside that building on game day, he is their man.

“Like we had Joey Harrington here with the fans booing him when he warmed up, he [Stafford] he was her man and I really think now you’re seeing what he meant for the franchise. “

Former Lions offensive lineman Lomas Brown can relate to Stafford’s situation. After 11 years in Detroit, Brown made stops with the Arizona Cardinals, Cleveland Browns, New York Giants, and finally the Tampa Bay Buccaneers, with whom he won Super Bowl XXXVII in 2003. Defensive linemen Ndamukong Suh and Cliff Avril, kicker Eddie Murray and wide receiver Willie Green are among other former Lions who left Detroit and won Super Bowl titles for other franchises.

“For me, it’s different, because if you think about it, I was in a similar situation, leaving Detroit and then going the other way and succeeding there,” said Brown, who made the playoffs four times in Detroit and won the division twice. . “I mean we were successful here in Detroit, I’m not going to take it off, but just being able to get to two Super Bowls and win one, it was great for me, so I’m going to look at it differently. But I can see how some fans see the point of view of what Stafford is doing out there now and wonder why he couldn’t raise the talent here. “

Other Detroit natives, like former NBA player Jalen Rose and rapper Sada Baby, are happy that Stafford was able to escape and reach his full potential, even at the cost of their favorite team taking a hit.

“For me personally, I was happy that I sent him somewhere because I would have wanted that for Calvin Johnson. I would have wanted that for Barry Sanders, ”Sada Baby said. “So, I’m glad we didn’t waste that man’s entire career playing for us because we wanted to be selfish and maintain a [great player]. If you look at him there in Los Angeles with Cooper Kupp, he’s having fun. “

Win or lose, Stafford has the respect of the Detroiters. And number 9 earned it.

“As a true Detroiter and Lions fan, at some point I say that certain players made their time here and were great for the city and contributed as much as they could, but now it’s their turn to escape,” Rose said. “For me, Matthew Stafford, I wanted to see if he could go somewhere else and place himself somewhere with this talent, and that’s potentially in the Hall of Fame. He wouldn’t have done that as a member of the Lions just because he wasn’t going to be able to really win as a quarterback. “