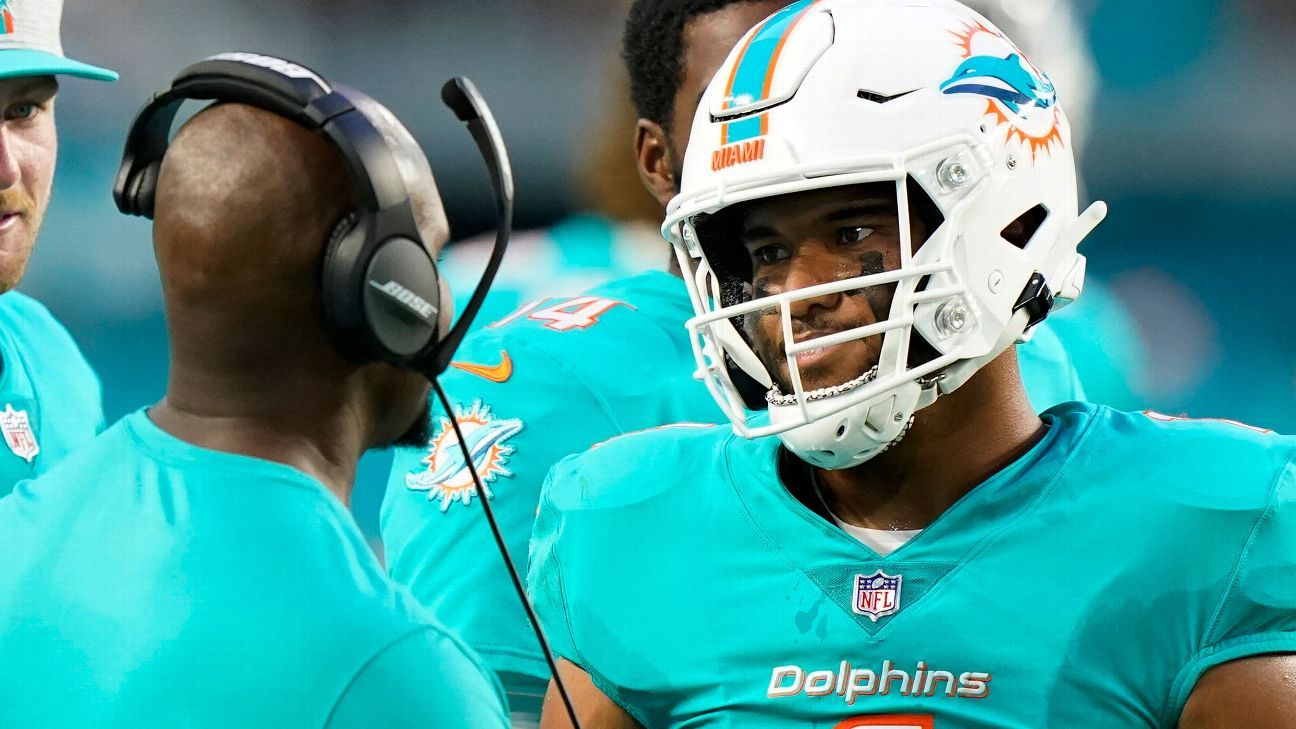 “I don’t really get into rumors, Tua is our quarterback,” Flores said when asked about Watson. “We’re happy with the quarterback, our quarterback situation. I’ll leave it at that, I’ve said it several times.”

The Houston Chronicle reported Wednesday that a trade between Miami and Houston involving Watson, who faces 22 active civil lawsuits alleging sexual assault and inappropriate behavior, could end this week. He applied for a trade in January before the first such lawsuit was filed against him and has not played or been active in any games this season.

Tagovailoa missed three games with broken ribs and led the Dolphins to their only win of the season in Week 1; they are currently on a five-game losing streak.

Flores previously supported Tagovailoa during a team meeting the week leading up to Miami’s win over the Patriots. Later that week, he publicly called Tagovailoa “our quarterback” and said it was important for the players and coaches to feel they have the support of his organization.

“I think it means a lot if it comes from the head coach,” Tagovailoa said in September. “The support I have from him and the team means a lot.”

The No. 5 overall pick in 2020 has thrown for 544 yards, 3 touchdowns and 2 interceptions in three games this season, though he only played six plays against the Buffalo Bills in Week 2 before leaving with broken ribs. He returned from injured reserve in Miami’s loss to the Jacksonville Jaguars, completing 33 of 47 passes for 329 yards, 2 touchdowns and an interception.

Flores praised Tagovailoa’s game this season, as well as his conduct during the week.

“He’s developing. I think this kid is smart, I think he is, I think he’s talented. I think he’s accurate, I think he definitely has a chance to be a very good NFL player … There are always obstacles in him. path for anyone. in any career, any profession. You have to work at them and you will be better for it. “

Rumors about the Dolphins’ trade for Watson have been swirling for months, with Miami reportedly being the quarterback’s preferred destination. However, Watson has yet to face punishment from the NFL while investigations into his alleged behavior persist. Houston has made clear its intentions to keep Watson out, but it’s unclear if he would be allowed to play this season if he was traded to another team.

Flores said his players are blocking things that “happen outside of our building” as they prepare to host the Atlanta Falcons on Sunday.

“Some of us have probably heard of it, but as of now, it’s just a distraction at the end of the day,” rookie tackle Liam Eichenberg said. “The most important thing this week is that we play the Falcons and we need a win. I think that’s what everyone is thinking right now: focus on the Falcons.”