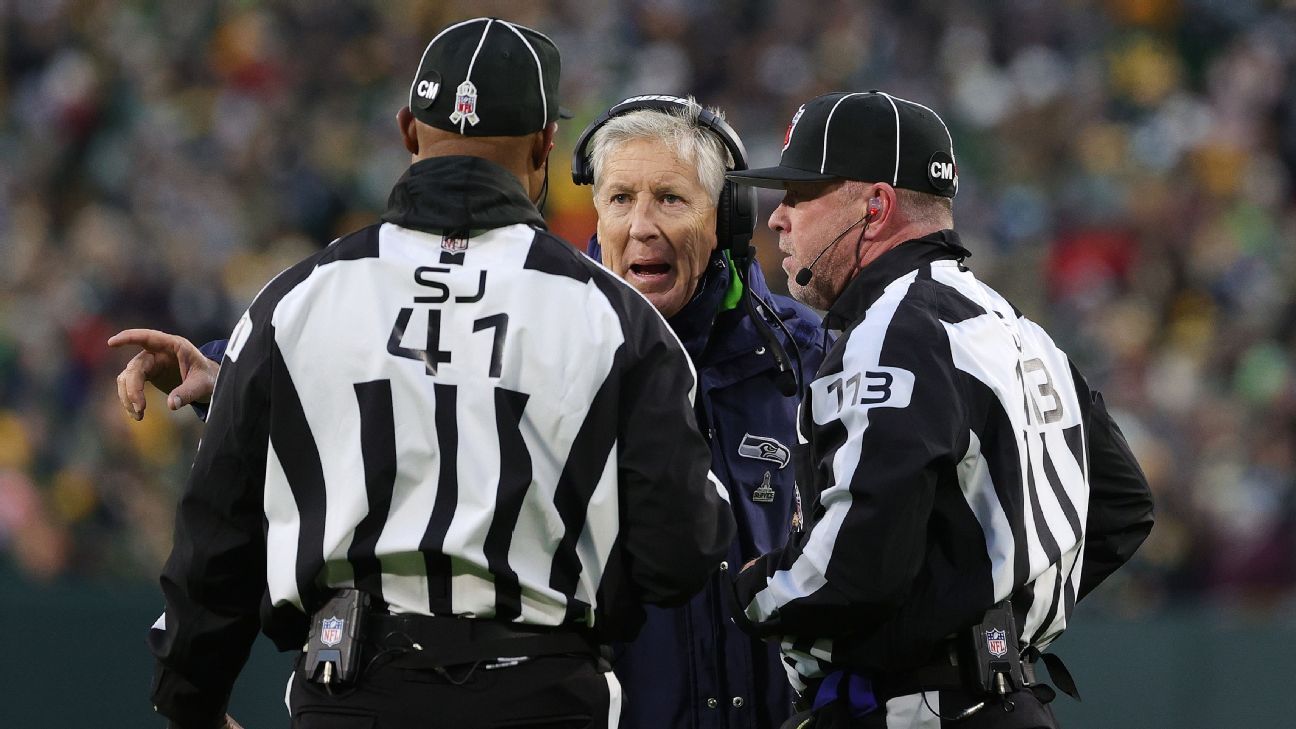 GREEN BAY, Wis. – Seattle Seahawks coach Pete Carroll disagreed with several calls against his team in their 17-0 loss to the Green Bay Packers, saying umpires were a “big part” of Sunday’s game. .

“I have some complaints about this,” Carroll told 710 ESPN Seattle on his radio show on Monday.

The three plays that Carroll discussed in detail were Russell Wilson’s fight in the first quarter, Aaron Rodgers’ fumble in the second quarter and Kevin King’s interception of Wilson in the third quarter.

The Packers were leading 3-0 when Rodgers lost a ball near midfield. Seattle’s Darrell Taylor emerged from the pile with the ball, but officials had already ruled that Green Bay recovered. The ruling was upheld after Carroll challenged.

“Darrell is on top of the ball and the quarterback was under him,” Carroll said. “Darrell had it from the moment the ball is on the ground. He leaned his chest on the ball and leaned over it … I don’t know how they saw him. He’s lying on the ground and the guy is reaching underneath. him … and they gave it to offense and that’s a great play. God, that’s a great play in the game. “

The score was still 3-0 when King intercepted Wilson in the end zone on a pitch from third and 10 from 12. Replays showed King lost the ball when it hit the ground.

“When we throw the ball, Russ throws the interception in the end zone, I don’t know, I see the ball on the ground,” Carroll said. “The guy has to finish the catch and I don’t know why he looked at himself that way. They called him, they saw him and all that. But those are the points on the board. Russ took a chance right there and it didn’t work out.” it didn’t work out for us. We were down there to kick a field goal. “

In Seattle’s opening series, the referee’s starting spot gave the Seahawks a first down on Wilson’s fight for a third down. The game was stopped due to an injury to Green Bay linebacker Rashan Gary. Officials later ruled that Wilson was short of the line to win a first down, moving up fourth and 1 of Seattle’s 41.

Carroll disagreed with the amount of time officials had to change the venue.

“There’s a teammate injured on the play and time goes by,” Carroll said. “We got a first chance and we were in the group, we broke the group, we are on the line of scrimmage ready to start and they stop the game and reverse that play. The way we understand it is that the booth has like 20 seconds to take. those decisions to cancel a call that could have been wrong on the field. But they had minutes and minutes and minutes. I don’t know, did they open the time window to look at it? I don’t know. I don’t know how that happened. “

Carroll said after the game that officials told him the venue was unlikely to be changed again on a first try if he had challenged. On his radio show, he said he could have done it instead of clearing if the running game clock hadn’t rushed his decision.

“I’ve never seen anything like this before,” he said. “While they explain it to me, they already started the shot clock, so I don’t even know what the distance is on the play until I look around me. It’s fourth chance. Oh, heck, we have to kick the ball and kick them deep. That’s what I’m thinking. I didn’t get a chance to realize that long enough to move on and decide to go for it. “

Carroll also appeared to disagree with a hold asked of guard Damien Lewis near the end of the first half that pushed Seattle out of range for field shots. Carroll said Lewis “got run over” on the play without elaborating.

Carroll was generally speaking about his communication with officials during games when he returned to Sunday.

“They were such an important part of the game yesterday,” he said. “They were a big part of the game yesterday. So in an effort to try to make sure we’re really on the same page and we’re working on that and putting the game together in a sense, you work on that over the course of the game. I know Some of these guys have been around for a long time and they always show respect and I try to show respect too. They have a job to do and we have a job to do, and we have to figure it out. We don’t always agree, that’s for sure, and that. It happened yesterday “.

The Packers led 3-0 until AJ Dillon’s first touchdown run with 10 minutes 42 seconds left in the fourth quarter. Dillon’s second score at two minutes made him 17-0, the final score in Seattle’s first shutout loss since 2011.

“It’s really daunting because that opportunity was there and our guys were ready to play,” Carroll said. “We couldn’t do it and they did. So we will always give them credit and it was a good win for them, of course, but that was an opportunity for us at a great time to seize something.” . “

Carroll reiterated what he and Wilson said after the game, that the quarterback’s surgically repaired finger was not a problem on his return. Carroll relayed how he told Wilson that his month-long layoff could have been a factor.

“Looking at the game, it wasn’t as sharp as we wish it would have been,” Carroll said. “But neither did the other guy. They all missed passes and stuff. So there were some conditions and things that played into that. I know everyone wants to go ahead and chase this whole thing about Russell not ready to play. He was ready to play.” . to go and he did whatever it took to do it, and it didn’t come out as clean as we needed in a lot of areas of our football, not just him. “