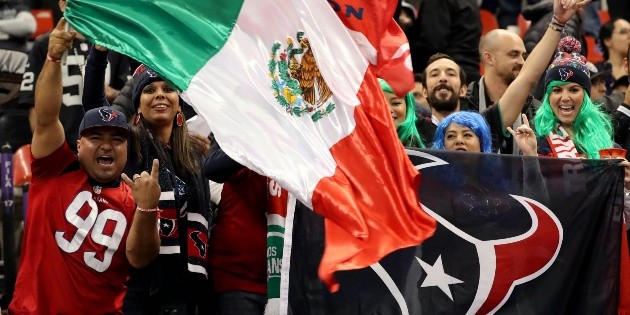 This Thursday, the NFL unveiled the initiative by which teams such as Houston Texans will be able to market in Mexico.

The National Soccer League (NFL) announced an innovative initiative International Marketing Areas that allows football organizations to expand to other territories outside the United States.

There will be 18 teams that will be able to build greater interaction with fans and thus generate greater growth internationally in various markets.

Of these, the Houston Texans have a long relationship with Mexico, country that hosts the largest number of fans of the franchise. In more than 16 years, the Texans have promoted outreach trips to our country and youth football games, in addition to the game against the Oakland Raiders that took place at the Azteca Stadium in 2016.

“We are thrilled to take our fans’ love of Texans football to the next level through this initiative,” said Texans President Greg Grissom. “We can’t wait to create even more opportunities for our team to build meaningful connections that honor and celebrate the passionate culture of our fans in Mexico, as well as focusing on improving our content in Spanish for all of our Spanish-speaking fans in Houston and beyond. “

Next year, the team will expand its presence in Mexico with visits from Texans players, cheerleaders, legends and the TORO mascot for special events and watch parties, unique focused content and in Spanish, for fans in Mexico to receive Texans merchandise, autographed items and more. The hope is that this new initiative will also allow the team to uniquely connect with the 1.9 million Latinos of Mexican descent in Houston and create additional opportunities for Texans partners and the Houston community.

The Texans are also pitching Spanish-language platforms to serve all Spanish-speaking fans, including the Mexican fanbase. These platforms include a dedicated website www.HoustonTexans.com/LosTexans and on social networks such as @LosTexans on Facebook, Twitter and Instagram.