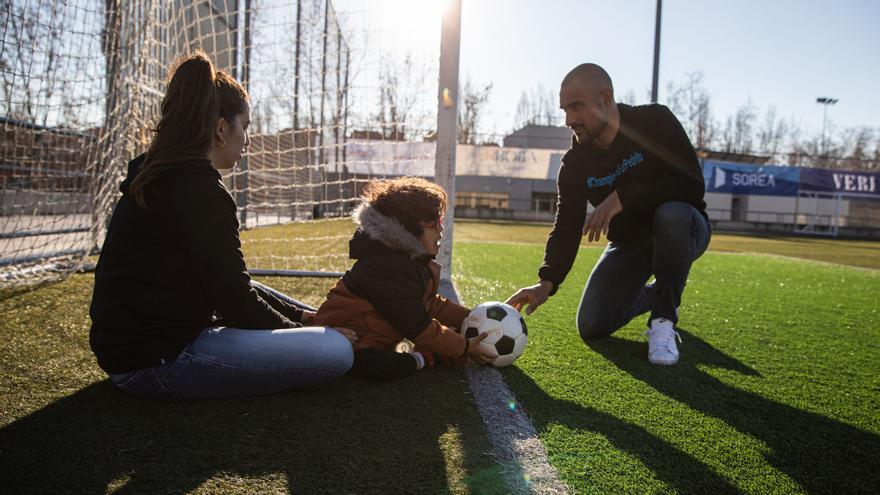 As soon as you were born, Pedrito they had to take him to the ICU, where he spent the first four months of his life. “They did all kinds of tests and they saw that little things were coming out both at the neuronal, heart, motor level, the food instead of going to the stomach went to the lungs… If I continue, I won’t finish,” explains his father. , John Paul Amantini. to him already Guillermina Marquina, his wife, told them that the child had Coffin-Siris, a rare disease suffered by less than 60 people in all of Spain. Juan Pablo, an Argentine defender who, at 37, has been a globetrotter in Catalan ‘amateur’ football, wanted to set up a charity match to raise funds to get a therapist dog for Pedro. What he did not imagine is the dimension that the initiative would take in support of this four-year-old fighter.

“I had it in mind for a long time but with the covid it could not be carried out. Both Guillermina and I were excited, but we did not expect the impact it is having.” According to his account, there are already more than a hundred footballers who have offered to play in this match. Besides of San Cristobal, Juan Pablo’s current team, other clubs have offered him their pitch for the match. “Sant Feliu, Cerdanyola, Montañesa, Manlleu, Vilafranca, Pomar, Parets, Tona… The list is very long and more and more entities are offered, which is nice. Throughout my career I have been able to meet many people and now I feel that I have left a mark in person who now support me”.

An event that does not stop growing

Since he started playing for Badalona B, this old-school Argentinian central defender has gone through many Third Division teams like Gavà, Blanes, Europa, Montañesa, Terrassa, Cerdanyola, Llagostera, Vilafranca and Castelldefels. In the latter he met Javier Sanchez, inseparable friend since then who is helping a project that does not stop growing. “I have received many messages from former teammates or rivals but also from players I don’t know from Second and First Division,” he says. “We are very grateful for what is being created and moved. It will be a very special day, especially very nice for Pedro and to improve his quality.”

The event, scheduled for the beginning of June, does not stop growing: they have received proposals to also carry out futsal and paddle tennis tournaments, First and Second Division players have promised them dedicated t-shirts to raffle them, clothing brands have offered to produce t-shirts for free with the slogan #ChampionsforPedrito to be able to sell them and NGOs such as the Ricky Rubio Foundation and multinationals have placed themselves at your disposal.

“It’s incredible the people, not just family and friends, who empathize and want to help us, I’m excited all day,” confesses Guillermina. Amantini works as a delivery man for the company Joan Soler, president of Vilafranca and member of the board of the Barça, which has offered him the collaboration of both teams. While Juan Pablo gets up every day at four in the morning to go distribute with the truck, she had to stop working to take care of Pedrito.

“He needs a person who is there for him all the time. To eat, to take him to the doctors, therapies. He was fed through a nasogastric tube for a long time and it was not until he was almost four years old that he began to walk. In November he began to have epileptic seizures, Thank God they have gone down with the medication. At night he has apnea and I’ve gotten used to not having a deep sleep. I sleep with his breathing and at the slightest I wake up because I know I have to move him so he doesn’t stop, “he says Mother.

The main action of the charity game was to get Pedrito an Australian Cobberdog, a highly sensitive therapy dog, to move him in episodes of nocturnal crises and allow his parents to rest. “Apart from getting him a canine therapist, we’re bringing some visibility to the multi-system syndrome that he suffers from.” Now, given the size of the initiative, they have decided to turn the #ChampionsforPedrito event into a homonymous association with the aim of being able to help other families in the same situation.